Tauras District Partisans and Deportation Museum is one of the first museums of its kind established in Lithuania.

Here, the history of freedom struggles in the Sūduva region in 1945-1952 is also introduced. A lot of attention is paid to the research of the deportees of the Lithuanian population in 1941-1953, as well as the collection and systematisation of historical material.

In the expositions, visitors can view personal belongings of freedom fighters, uniforms, weapons, documents, publications, memoirs, and graves of fallen partisans found at the places of their death or burial. A number of documents, household items, work tools, clothes, handicrafts have survived to this day, testifying to the poverty, hunger and suffering of Lithuanian people during imprisonment in labour camps and exile, where they were transported as many as thirty-four times during the mentioned period. 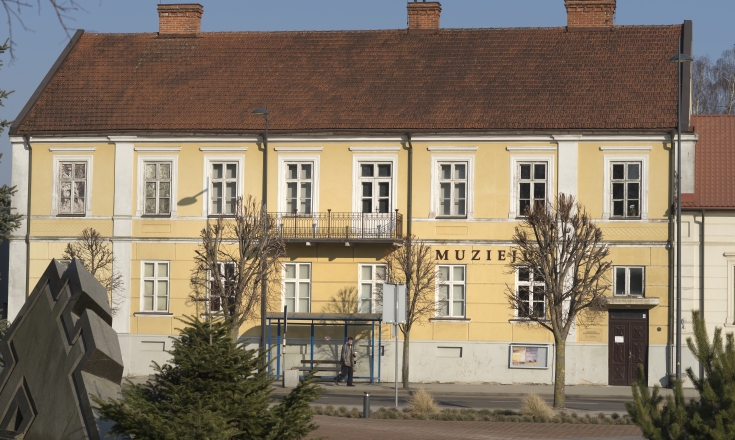 At the initiative of Marijampolė political prisoners and deportees in November 1993, the museum of memory of the most painful days of our Motherland, exiles and post-war armed struggle opened its doors to visitors at Vytauto st. 29. Aldona Sabaitytė-Vilutienė, a partisan liaison, political prisoner and deportee, who can be considered to be the founder of the museum, was appointed as its manager.

The first exhibits of the museum (crosses, rosaries made of bread, knitting, handicrafts, letters on wood bark, etc.) were made in Marijampolė prison, Intalag and other Soviet labour camps or in exile. As soon as the winds of freedom started blowing, the search for the burial places of the dead and martyred freedom struggle participants as well as the reburial ceremonies were initiated, and the graves were transferred to the museum for safekeeping.

After the renovation, in 1999, new exhibition spaces were installed to commemorate the battles of the partisans of Tauro County and to display artifacts commemorating the deportations. The displayed directions are: "Establishment of Tauro Partisan District"; "Fight of Tauro Partisan District Bridage"; "Women Partisans", "Deportation of 1941"; "Post-War Deportation"; "Revival"; "Fight Carried out not only with Weapons." They were created by artist Artūras Kaminskas.

In the years 2019-2021, renovation works were carried out. Now visitors can view the two main exhibitions "Armed Partisan Resistance to Soviet Occupation in 1945-1952" and "Deportees, Prisons, Labour Camps", and see what the NKVD, a fragment of the KGB interrogator's office, and a prison cell looked like.